http://www.prickofthespindle.com/fiction/4.1/bryan/all_over_a_bowl.htm
Part one, an abbreviated version of chapter one of my third book, is available at:
http://www.dogzplot.blogspot.com/
Part three of my four part novel is up and running at Prick of the Spindle. Check it out. 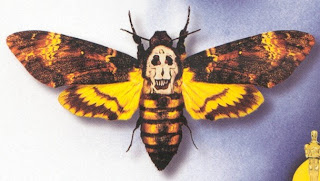 We have forever been fans of convenient store clothing, especially the sales on the racks outside. Our particular fondness for the wolf shirt started years ago and probably peaked with this shot of my brother Adam at a NASCAR event. 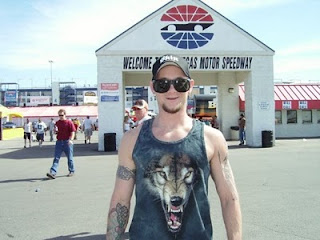 But recently the wolf shirt has made a strong comeback, and some stiff competition exists. My favorite, even though the t-shirt could be better, is the review of the product by Bee Govern at the bottom of this link I have listed. The video is okay, but the review posted deserves props and should be read by all wolf lovers.

Andrew Borstrom and I used to write one poem per week. For this one we used two images. I will show but one.

“The Covering of Fall or The Woman at the Wheel”

Look out into the pitch-black sea. Let the aphotic ball reveal her past.

Something jutting up from the red desert sand: desiccated brown hide shriveled and peeled back from the bleached-white bones.

Look again into the pitch-black sea. Let the sunless ball reveal her present.

Something hanging from the barren tree: half-skinned deer revealing tendons taut and percolating red from the slitted throat.

Look deeper into the pitch-black sea. Let the lightless ball reveal her future.

Death at the spinning wheel made from her own rib cage: the silver silk torn from her head and gray-like white covering falls to the floor.

Now look deeper than deep into the blue-green sea. Let the shimmering ball reveal everything.

What do you see in that vibrant eye?

Underneath the blue and green: a silver thread that shines and sheens but only hints at what it means:

A sliver lodged underneath a fingernail

A cocklebur stuck on a puppy dog’s tail

A cough after the bestowal of a kiss

A blown out candle granting the child’s wish

A graveyard mound by a school playground

A moon trailing the sun round and round

“Please Mommy can I go outside and play.” 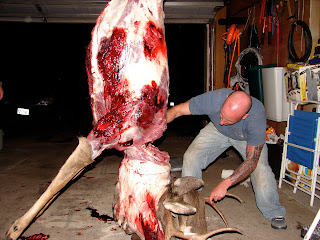 Apparently someone bought my old address when it expired. I never thought anyone would want it so I didn't pay much attention, but I would like to thank them. alecbryan.com sounds much better anyways.
Posted by boo2d2 at 2:15 PM No comments:

I am posting a story I wrote for a magazine called One story: They write the first line and you take it from there. Since it was written with the intent of just that magazine, here is what I drew up. The line to work with is: Working for God is never easy.

The Road Most Traveled

Working for God is never easy. You cannot cheat on your time card, cannot take extra minutes with lunch, and you have to begin and end each day on your knees, in supplication for your daily bread, not to mention the whole tedious part about forgiveness and sin! However, working for the devil is a cinch. He never minds if you show up late, take the day off, indulge in a vice or two, lie about your whereabouts. In fact, he encourages such behavior and oftentimes rewards his employer for such feats.
I was talking with Johnnie Roscoe just the other day. He has been under the devil’s employment for twenty-seven years. He was under God’s tutelage for thirty. The man, to say the least, knows a bit about both paths, and he shared his insider information with me, who am a strict Satanist due to indolence. “You see,” he began, “your generation has only served Satan because of the ease, because of the benefits, because you hate, blood, sweat, and tears.” His sour glance in my direction alluded to the fact that he didn’t like us “Satanists for the benefit of laziness” types. I munched on my pastrami sandwich, lodging a piece of pepper jack cheese between my teeth, which I quickly swished out with a swallow of beer. “I mean look at you,” he continued his diatribe, “it isn’t even noon and you are already drinking beer and got your shoes kicked off. That’s not how it used to be.” I was not curious to find out how it used to be. I am one of those people who live for the moment, and at the moment, ease during the day, and getting drunk or stoned every night just seemed the right way to be. I knew Johnnie would tell me anyways, try to enlighten my mind and make me respect Satan more than hitherto had been done. 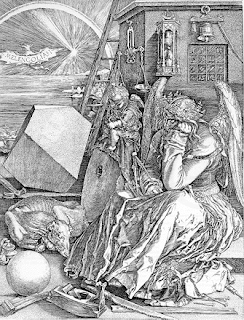 “When the first of us dissenters crossed that scab line…” I interrupt Johnnie’s message just to illustrate how strange people behaved two or three generations ago. He uses words like “dissenters” and phrases so odd in context as, “crossed the scab line.” It makes the entire debate of God and Satan sound as if it is some industrial battle or like the game of baseball when the player’s union goes on strike and then those other players who aren’t so good but want a chance at a decent paycheck and to make it on TV come and play and all the real players boo and hiss at them. Like the real players belong to God, and only a scab would work for Satan because all Satan can really offer is a faded, phantom Caesar, flash in the pan type glory. But glory is synonymous with God and the generation who served in World War II. Us young pups, us Vietnam Veteran children know that glory is false and causes people to behave in such vainly enamored self-righteous ways that we would rather skip the whole thing and live a life in the shadows and passed out on a floor that belongs to who knows whom. But he continues. “…it caused a real commotion. It pitted brother against brother. Some were disowned, repudiated by their own families. They called us evil; said we would burn in hell. They viewed us as the most wicked people in the world and we had to fight, I mean really fight for our right to work for Satan. Those believers wouldn’t let go without a fight. They made up these crazy tales about us killing goats and burning some style of pentagram on lawns and sacrificing children to our master.”
I laughed a little when Johnnie told me this. It just is so ridiculous to think that whom you followed used to be so vehemently contested and that it entered the arena of religion at all. I mean what is religion anyways? My generation sees this “battle” (Johnnie’s term) as nothing more than a lifestyle choice, and heaven and hell? these are contraptions constructed by moralists who worried society would get out of hand if there wasn’t a fear of one place and zeal for the other. But Johnnie wouldn’t have any of my smirking. After all he said, “It was my generation who paved the way for your lazy asses. Now we almost wish we hadn’t done it.” I looked at Johnnie, conjuring up as much of a sinister look as an un-sinister type like myself can, and I said, “But you did do it Johnnie. You did cast the mold for future generations. And that has made all the difference.”
Posted by boo2d2 at 12:20 PM No comments: