A play I wrote that was accepted by Burnside Writers Collective and the bastards never posted it or got back to me, and I feel I can no longer neglect my followers by waiting; plus the piece is time relevant (albeit no true titles are given, so its relevancy is far more reaching (a lesson learned from Camus' THE PLAGUE)) Have at it fans. 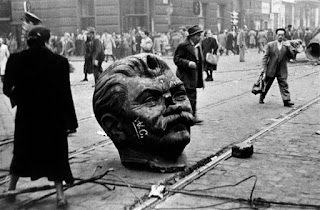 Hands Born Dirty    A play by ALec Bryan
The scene: Inside a small hut somewhere in Africa. The hut is made of earth-tone bricks, and there is no furniture or adornments in the room except for a row of machine guns along the back wall. The hut is near a road, and occasionally the sound of a car or truck driving by is heard. The scene is of Hitler Damu. He is dressed in army fatigues, two sizes too large. The scene begins when a clumsy cameraman, perhaps Damu’s recruit or cohort, picks up the camera, turns it on along with the light it is equipped with. Damu doesn’t know the recording has begun. His cheek muscles are tense; beneath them he is gritting his teeth. The veins running through his temples stick out, and his bloodshot eyes, hidden deep in his dark skin, express numerous possibilities: fatigue, poor diet, insomnia, drug addiction, fanaticism or genetics.
Hitler Damu: (staring at the camera) Is it on already? (angry and trying to gain composure) You were supposed to give me a countdown you idiot. Never mind. I will begin. (straightening himself) My name is Hitler Damu. I am a powerful man and a member of Stalin’s Sons, a revolutionary group with numerous cells around the world. I will give an account of cell number 654, and, per the leaders’ orders, pretend the camera is a friend with whom I am discussing certain matters as if at a coffee shop. I will now refer to the camera as Hitler’s Ghost. I find it will be easiest for me to play two parts.  Why don’t we start, Hitler, by you asking the obvious question? I see you eyeing my armory.
Hitler’s Ghost: (Damu plays both roles and moves each time he asks or answers questions to show each side of his profile, the left being the ghost) Why so many guns?
Hitler Damu: No real reason. For protection, perhaps, maybe intimidation, although I have never needed them to intimidate. Have I ever shot anyone? Of course not. We revolutionists are pacifists. Known as P.B.Ks, Pacifists Born Killers, we understand certain things which make us guilty.
Hitler’s Ghost: I’m not sure I follow you.
Hitler Damu: Let me start with my education. Perhaps, yes, that is a good place to start. Then no one can call me a crazy nigger. Born and raised in a poor African village, I never would have had the opportunity for an education had my affluent father not been the governor—I’ll use the American idiom—of the region. Filching American grants, money that would have been set aside for USAID or for immunization in the area or Aids awareness and prevention groups, my father “borrowed” the money and matriculated me at Cal Berkeley. I studied chemical engineering. It is here, and I say this because the leaders of Stalin’s Sons live under constant surveillance by the U.S Government, so their identity is no secret, that I met a fellow engineer and a biophysics major who began indoctrinating me about their revolution.
Hitler’s Ghost: I don’t want a history. I want an explanation about these so called P.B.Ks.
Hitler Damu: Yes, Yes, (agitated) I am getting to this. After a couple weeks of reading books and pamphlets about the cause, they—my fellow engineer and his friend—asked me how many lives were murdered or sacrificed so that I could get my education. None, I said. Then they pushed me down on my bed, standing over me, and Vladimir told me my father had killed many, and I was a P.B.K. They explained the term, but I still felt confused, so then they furthered their explanation. How much money does each year cost for you to be here? asked Fidel. I told them student life cost about fifty thousand per year, plus the extra twenty-five thousand I received, so seventy-five thousand times the four years and double or triple that for the two years in the graduate program. All totaled, somewhere around seven hundred and fifty thousand to a million dollars. For a poor black African, said Vladimir then spat. Where would that money have gone? Fidel badgered me. I told them I didn’t know. They said that didn’t make me less guilty, and that I was a belligerent P.B.K. Then they pulled out their intelligence, maps and brochures and government lending figures, and they tallied the death toll of my being in America the North. They had equations to figure out how many children in the area I was from would not be immunized and would die, malnutrition deaths, aids deaths, bad roads, lack of medical supplies and on and on they went. Do you want to know how many people you have killed by getting an education? Vladimir asked, almost boasting. I felt sick, but I wanted to know. By our calculations, he said, no less and no more than sixty to seventy innocent people would die while I stayed at Cal Berkeley.
Hitler’s Ghost: That’s enough to make you a serial killer.
Hitler Damu: (fuming) I know the implications! I don’t need a smug reminder.
Hitler’s Ghost: So then what?
Hitler Damu: So then I learned my father was a killer, and any government, especially big government would run our revolution for us, and they would make their children killers. Sure they do all the killing, and us pacifists sit by and watch and wait until the right moment and then we will take power, and we will no longer let the innocent die.
Hitler’s Ghost: Do you smoke weed?
Hitler Damu: Yes, but not until I got to Cal. But I don’t see what this has to do with anything.