Elimae passed on this one: I like it though, so here it is.

Chasing the Dragon
Yin and Yang fought so hard for space that the white and black could not be told apart, a limited, melded grey circle accelerated at such speeds that it would be impossible to estimate ad unguem factus the rate to which they reached. The circle began to burn a hole in the earth and plow through eras, eons:
Humans—augured 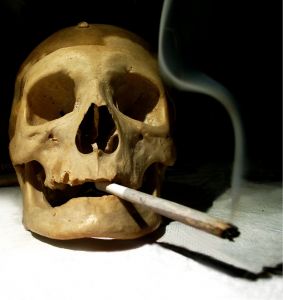 Cenozoic—augured
Mesozoic—augured
Paleo/Precam/Hadean, and hit the center streaming, impossible to gauge which half of the circle won before it burned up.
Ouroborus is an impossible dish to serve at even the most expensive restaurants. Chefs called in from all over the world studied the problem as it circled, tail in mouth on the stainless steel table. We wouldn’t know where to stop or stop, they told the owner.
Don’t you mean start or stop.
It would be impossible to know the beginning from the end, a brazen Indian chef, known for his curry dishes, added.
Todd told Mark that since life is infinite, or the life after life is infinite, a dialectic nightmare so to speak and when put in terms of casual conversation, there is only one choice not two. Suicide is a far cry from ending life. The choice to live is all we have, and dialectically speaking, isn’t a choice but a negation of choice, something forced not spoon-fed us from a Gerber God. Free will is a device the devil made up. Nothing is ever free. Choices consist of more than “pleasure principles,” biological functions, consciousness and unconsciousness; they stem from more than regurgitated nerves and instincts of those Neanderthals. I’m confused said Mark. Did you choose to be? Todd asked.
The chicken and the egg existed at the same time. Due to Catholic and doltish thoughts for about one thousand years, some agreed that if ex nihilo were an actual possibility in the chain of possibilities then the point is mooted. I watched the shadows on the wall of Plato’s cave with my mate Sartre and he preferred staring at the wall. Said THE WALL made life more interesting than trying to measure the distance between the wall and the light outside. He then said the outside light consisted of nothing. Interstices, my boy. Anytime you get a chance to put the word interstices in your writing, do it. The blank spaces between each word are more significant than some of the words.
ApoetinNewOrleans,Ibelievehewasbornthere,feltchronologicaleventsoccuredsorapidlythatnosuchthingAschronologyexistedandallhumanscoulddo,thembeingsuperiorthanotherappendagesofnature,wastryfrommomenttomomenttopiecetogetherwhathappendandimmediacyandrecollectionwerenodifferentbecauseneitherreallyexistedifyoucouldn’tprovethatoneexisted.HeshothimselfbeforeandIemphasizetheinsignificanceofthewordbefore,hefinishedhisfinaltheorem.ItstillirksmethatJOHNKENNEDYTOOLEwonthePulizerafterhisdeath,orwasitbeforehisdeath,deathbeingbutasleep.Marcel Proust had padded walls and a wonderful memory.
My girlfriend told me she had the “sickness unto death.” Which of the two is it? I asked her, concerned. The first kind. Symptoms include the wish to negate existence, utter annihilation. Well that is a relief, I said. I suffer the second, and reprieve is like that guy in KOLYMA TALES who chopped off his hand so he wouldn’t have to work anymore, and when that didn’t work, he lodged his head so tight between two limbs that he hung himself. One of my greatest tasks in life is to get more people to read that book or Solzhenitsyn’s. What’s this about? I asked her. The used needle had been thrown away, but the spoon with the ring of evaporation and brown burn sat on the bathroom counter. Her arms had a few new bruises. I can’t seem to get a good high anymore. That sucks, I told her. What are you going to do?
Kill myself. Will you kill yourself with me?
I can’t, I told her. She asked me why. Because I suffer the second “sickness” not the first.
Well I refuse to chase the dragon the rest of my life. I’m going to overdose.
Please don’t. It won’t end your suffering.
I don’t believe in hell. I guess I’ll know what it is if I get there.
You are already there, my girl. There is no need to kill yourself.
One of us is right and one of us is wrong, she told me. I told her it was probably both.
Posted by boo2d2 at 9:09 AM

Email ThisBlogThis!Share to TwitterShare to FacebookShare to Pinterest
Labels: science.kukuchew.com