Written for Dogzplot only:


K.O.
I’m not the biggest man on the planet. A buck thirty dripping wet, five foot eight inches with heels—biceps, triceps—I got them. I decided to be the first gay man, at least the first out-of-closest-queer to take up MMA and kick the living shit out of one of those steroid freaks that eat, drink and sleep manliness in like a protein shake, while yelling out every damn cocky phrase invented. You’ve seen the type (not me, of course. I’m an anomaly): hideous cut off shirts, a couple gaudy tattoos, and a chick whose face is a double bagger but whose fake breast look like the speed bag the freak practices with at the gym. He laughed when we touched gloves. He should have taken me serious. After dodging two of his jabs, I knocked him out with a left. I stood over him, and with eyelashes painted, glitter sprayed and lipstick on, as he came to, I told him, “you just got knocked the fuck out by a queer.”  Humiliated for life, but what made it the sweeter was his friends wouldn’t stop repeating my line, reminding him what type of person knocked his ass out. 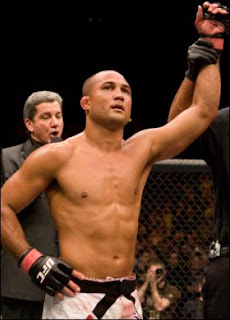 Email ThisBlogThis!Share to TwitterShare to FacebookShare to Pinterest
Labels: mma.actionsportshub.com