Boy, You’re going to Carry that Weight
The couple leaving my office is going through some marital problems. The wife, Sharon, is addicted to pain pills, and even though she is a stay at home mom, claims no one knows what it is like to be so bored.  The husband, Gary, is addicted to pornography and can’t seem to help himself. The fight started when Sharon found a stash of raunchy, not the classy brushed-up stuff, hard-core pornography—you know the kind—glory shots, assholes with dicks in them, barely eighteen, cum in the face, and on and on it could go, should go, maybe, until one found a point to be disgusted, but I find it takes too much to shock a person who is an addict into a state resembling remorse. Yes, I told Gary about the suffering he caused himself and his wife and his two boys, and I told him he would no longer be able to exercise his priesthood, might even be excommunicated, but bishops aren’t psychiatrists, and our solutions fall short with modern man because we deny the flesh and speak only spirit, even though we, bishops and psychologists, might find a middle ground where flesh and spirit collided. Instead, we mention good old-fashioned values and punishments—duty to God, to family, vows made to a wife in the temple, guilty conscience, pangs of hell, and all that stiff stuff, but the soul of man has ventured off the straight and narrow path and onto the crooked path of self discovery.  I heard one person blame Freud, another said the devil had revamped his program and made it more alluring, as if it wasn’t alluring enough already. 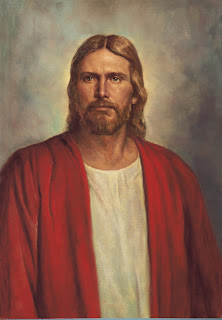 My appointment before the dismal couple didn’t go any better. I spoke with a twenty-year old girl. I won’t mention her name, it might have been my daughter. She told me her and her boyfriend, someone I had strict confidence in and had over to my house for dinner on several occasions, had fooled around. I didn’t want to ask any more questions, but my calling, you understand, prohibits me from, first, being her father and kicking her ass and then her boyfriend’s, but it also requires me to come to know the depth of the sin and administer the just punishment so the repentance process can begin and the atonement can be efficacious in that person’s life. Have you any idea what it is like to hear your sweet daughter explain that it started out by her sucking his dick? I looked up at the picture of Jesus—we bishops tend to have the Mormon status quo picture of Him, the one with the burly beard and the red robe draped over his muscular shoulders, and eyes that could cause coal to cry white tears. The picture told me nothing, spoke no comfort to my angry heart. What next, I asked her, trying to remain calm and wipe the sweat from my forehead at the same time. Then he wanted to rub me, you know, down below. At first, I pushed him away and we made love through our pants, sort of. He got off, anyway.  After doing this a few times, it wasn’t enough for him. He blamed you for me being so prude, and I didn’t like that. It made me feel like I was denying myself of something I wanted because you are the bishop, but I also felt guilty. She paused and cast her downtrodden eyes upon me to see if I had come undone. I had nothing to say, so I proceeded. And then what? And then nothing, she said. We did it! Is that what you wanted to hear? Tears came to her eyes. We did it a lot, and it felt good. And now I am pregnant and he dumped me, and wants me to get an abortion. She became an emotional wreck at this point, exceeding even me. I hugged her as her father and reprimanded her as her bishop. I gave her a book on repentance and told her to go home and pray about this, and that I wouldn’t tell her mother, couldn’t, due to policy, and that we would talk again in a week and try to reach a resolution.