This is the first paragraph or graphs of my second novel. I am still looking for a home for this piece. On the outside it reads like a novel, but it is the most symbolic fiction I have ever written. You would Start with these images to understand the motive or underlying story. 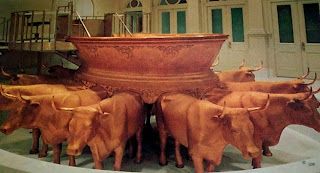 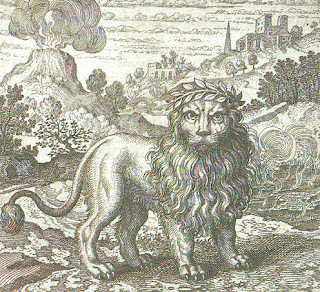 The panting, the grunting, the labored animal breathing, a host mustered into a battle against an unknown enemy. The smell, the stench, the hot breath billowing out, streaking the flanks with wetness. The dust, the sand, the bloodshot eyes looking ahead into desolate desert plains. Mud cracked, trodden down, wizened-hard, hooves plodding along and kicking up dust behind us like a whirlwind rising.
On our backs: the burden—a globe, the immensity filled with water. Forty eight legs buckling, yoked to the staggering weight, stricken by the load, but the mass rallies onward and further into the unknown. Upon the globe, slinks an old, worn, spoiled lion, ribs jutting out of skin, lungs that cannot marshal the strength to rise, flies hovering around the head, as if the meat were already carrion. From its vantage point, the lion’s tired and cynical eyes fall upon us in vexation and seem to say: “He’s coming! He’s coming!” The lion slouches back down exhausted, stricken and consumed. Behind us lies the genuine terror, a form arisen to shake terribly the earth, moves with the swiftness and force of mighty rushing waters.
Up front, the lead ox bellows out: “Stay yourselves. Be not dismayed. Look not back. Move onwards.” We look back. In the distance, a speck, fast but far, is closing in on us at the colossal speed of a destroying storm. We turn our head away and keep moving with the mass, pretending we did not see what we know we saw. With twain the mass moves onward. Our burden begins to increase. The hook in the nose is pulled taut. The shoulder flesh is now rubbed raw and bone protrudes—the weight is too much to bear.
The anemic lion attempts to lift its head once more but just grinds its face into the globe. We know what the lion’s tired eyes sought. We dare not glance behind us. We need not now. For in the backward distance we hear the dreaded cry, the carnivorous roar—the roaring of the sea, a roar causing both earth and things born of earth to tremble, to come undone.
From up front the voice beckons once more: “Gird yourselves. Keep your eyes on us.” We disobey and glance back out of fear, out of reflex born of fear, out of reflex born of fear and preservation, for we are the rear oxen. We see a lion, full mane streaming gloriously in the wind, haunches, legs and paws stretching out in full gait, veering not on crooked paths but like massive wings it fills the breadth of our backward vision. Its  face like a flint, a mouth ready to lay waste anything it snatches hold of, and teeth glistening like a sword sharpened on the stone and ready for battle—all attributes of this terror designed with one thing in mind—destruction—and it is this we see closing in on us.
We turn our head and keep running with the mass. A nameless terror takes hold of our legs, courses through our veins, causes our back to slouch lower beneath the burden. Our heart has failed us, and at such a time? We run on, dispirited, unable to shoulder the weight placed thereon. The group is now laden with our dead weight as well as the weight of the globe.
The lion roars. Earth and bone tremble. We feel the blast of air against us like a devouring fire, feel the heat of breath as a constant flame. We turn again to see the beast that will devour us. It is now near enough to behold the gleam in the eyes. Our right hind leg slips as we fall into the only quagmire, the one possible snare the desert possesses. The ring is ripped from our nose, and the rattling chain slithers on like a snake with no head. The mass notices not that it has lost us.  Now forty-four legs trudge on towards the empty horizon. Forty-four legs shoulder the massive weight. Fallen and left behind, we try to get up but cannot move. Each attempt of escape deepens the hooves into the pool of soft mud and we continue to slip the way a drunken man staggers in his own vomit.
The lion is closing fast. We hear its grunting, see its nostrils rampant exhalation, feel the vibration of earth as the paws drum upon the desert crust. The mass of oxen is beyond calling back to succor us. They have their own burden and our destiny is no longer enmeshed in theirs. We are helpless. Ensnared in mud and unable to move, we watch in horror as the lion, full of wrath and fierce anger, bounds towards us. We see the elasticity of muscle in its hind legs coil and then pull taut as it leaps forward to deliver the death blow. We see deep into the dark throat and hear the roar that deafens us. The final image passes over us soundless as we prepare for the blow, as we see the stretched out lion with its gaping jaw revealing two rows of razor-sharp teeth about to immure and then crush our skull. We see its claws extended and ready to extract the lifeblood in rich effusion. So immense is this final image of the outstretched lion that it crowds out the sun. And just before it devours us, gross darkness covers the earth--
Posted by boo2d2 at 10:53 AM