In a Montana Sort of Way 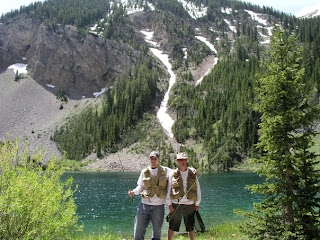 This is a short story I wrote about 2 years ago. This is my first short story post in a while. Please comment on it as my skills have grown rusty and my craft is ever elusive these days.

In a Montana Sort of Way

Eight years old we rolled in an old Chevrolet, seated in the bed because I told my friend’s dad that all Rush lacked was a good drummer. Yes, he played the drums and didn’t find the comment funny, but did we care? We were on our way to Montana to fish the Beaverhead River. We could dream in the shell-protected bed of our Shangri-La, trout the size of arms, without needing a radio or passenger window to remind us of our whereabouts. Besides, what did the dark hold? Could it tell us anymore about the river than we could imagine in our green minds. Dreams told us what we had concluded in waking hours. The passing stars told us more than my friend’s dad could tell us about aggressive rainbow trout, large browns at the bottom of subaqueous holes, 27 inch cutthroats near the outlet of the Clark Canyon Dam. We knew what we needed, what we wanted, and to think some grown man could add to our zeal would have been foolishness on our part.
We got all we bargained for and more. As inexperienced fly fishermen, we caught anything between 18 and 21 inch fish, and have pictures to prove our fishing tales. But, the big ones, the wily buggers, those always got off. Broke our line with a jump, snagged us on submerged tree limb, or just ran too far and too fast for us to get them in before they achieved their freedom. That’s what kept us coming back. We needed 24 inches or more. We were comfortable with our phalluses, and this quest couldn’t be termed as little man syndrome, especially since my best friend was like 150 lbs at eight years old, and if genes can be calculations of future measurements, I knew this kid would be a beast. And he was.

Norman Maclean pegged the flesh of life down to the raw elements. Rocks, water and words, after that, doggerel and mop-up rooms where ones make the general commerce, and if a twenty gets in there by mistake, then sing it girl, “Hallelujah, Hallelujah,” but make it Cohen’s version for sure. We ride in the bed because his dad doesn’t like me. I’m eight, old man, and of course I messed with your head. Pass the time; pass the state line, Idaho, then Montana. What is a state line anyways? What is a state? What is a line? Do the trees know?, the spruces more robust on the Montana side, and what of those caught between? The paraplegic Idaho side, limbs gnawed by spruce beetles and the green-needled Montana side taking in all the light (Ps). Big P little s equals photosynthesis=in the long run, oxygen and life. Tons of oxygen up here. It is big sky country, but so is Wyoming, just no catchphrase. And I have a beef with Annie Proulx’s BROKEBACK.  Montana and Wyoming are hard states. The people don’t put up with the guff of what some people might elsewhere, and for that, their lack of a poker face, tact at a premium, I love them, would like to think I am the same way. I still have to say the two states are made up of a mould more of the type that would tie a man to a barbed-wire fence and assault the man for being what they ain’t. And so would the panhandle of Idaho for that matter.
But this is a fishing story not a political story, so let me readjust some things.
First: I would have died happy if I had been the first man to pen the words, “My mother is a fish.” It would have been my father, of course, by the very nature of things that swim, and my mother would be the water my father swam in and what would that make me? Too many questions, and that is what I am. A big “?” to every motive, make that action not motive, motive sounds too unquestionable.
The dirigible clouds hover in bowling pin formation
Five minutes later a seven-ten split above and the
Sun rolls in between them both, if God would shout
Fieldgoal no one would argue and some might laugh
The water runs a line of clear lingerie’s garter over a
Fat woman’s naked thigh. We search with young man’s
Utopian hope to see the spotted quarry: the fish

Therefore I am a fish.

Prick tried playing me like I didn’t know what the hell was up. You can do it, sort of like seat time in a plane, live in Utah and be a Montanan. I had logged some three to four years as a Montanan and say two to three years as a fisherman. The license plate said Utah and had a skier on it, but that didn’t mean I skied, nor does every single person from Utah. They are all Mormons, however, and the bugle boy-prophet, Moroni, would be a more adequate depiction of the driver’s inner drive in life. I can say that without being racist because besides being a fisherman, I am a Mormon, and flip the bird by sticking up my pinkie so as not to offend other Mormons—that’s a joke. So this prick tried selling me flies that floated, something I rarely use, and some streamers that made a rainbow need color and looked like a raccoon tail while tripping on acid—the person not the coon is on the acid for that to work. What he was really trying to sell me would best be described as his superiority for actually living near the river, and what he might have thought of as his skills. The kid may or may not have been a poser. I won’t judge him. He judged me, and in so doing, pissed me off. I left Dillon and arrived at the river nine minutes later all in a rage. I caught a big brown. I continued catching fish all day long. I caught them the next day too. I left on a Tuesday and logged in three days seat time.
What is a state anyways besides lines on a map?
What is a line anyways besides a jealous wish to
Be a circle?
Montana is all in my head. Montana is a state of mind.
And I am way more in a Montana state of mind than you ever could be standing behind the counter selling fishing gear.

I am as Montanaed as they come, bitch. You better get yourself some seat time on the river and later that night at the bar. I didn’t see you there once—the bar nor the river.