New Fiction for 2017 "Frosty the Snowman Owes me Tuition" 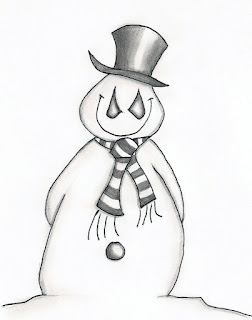 (Sinister Snowman created by Rothmir on DeviantArt)
Two days before Christmas, my dad woke me up to tell me I needed to put on some clothes and meet him outside. I shuffled through the pile of dirty laundry and put on a shirt, Adidas running pants and sneakers. I grabbed my coat and beanie off the rack, looked at the red-haloed numbers of the clock, which read 1:05 AM then hurried up the stairs and outside. My dad stood with an officer on the porch, and in the distance I could make out the flashing lights of two cruisers, a Cadillac Escalade parked in the middle of the road, and my Green Ford Exploder, the Sherman Tank, planted over the curb, blocking the sidewalk, hood through a city fence and the front wheels lodged in a small snowdrift. I regretted not putting on socks as I zipped up my non-insulated parka and pulled my cotton beanie over my ears.


I had parked the Exploder on December 18th, wheels turned into the curb, where it should have stayed the entire Christmas Break until I returned to school. The parking brake had gone out a week earlier, probably the pang I felt during my plant taxonomy test, or maybe it held and gave out later that night. All I know is that when I entered the empty stadium parking lot, illuminated in fours by parking lot lights, my car had rolled forward four feet and rested against the curb, lonely looking.
I knew it had been going out for some time. It seemed like everyday I had to push the brake further and further down for it to stick. This new affirmation, my car four feet beyond the few spaced out cars, looking like some idiot got high and felt tired of yellow lines or symmetry, or like the football team jocks played a joke on some cheerleader and lifted her car and moved it four feet forward to freak her out, luckily held in place by the high curb, more than bolstered suspicion; it cemented the facts as they stood, or poorly parked in this case.
The driver of the Escalade is a good citizen. He could have driven off and left the scene of my wrecked SUV. My Sherman Tank would have been a Christmas mystery for the neighborhood that way. People would have walked by or driven by real slow and pointed, maybe stopped and conversed amongst themselves until the shrewdest of the bunch pointed out some obscure tire track and deduced that it had been two drunk drivers—the getaway car hit the Green Explorer, the driver of the Explorer got out, surveyed the damage (the shrewdy might point to some size ten footprints at this point), ran around to the passenger side, got his twenty-four pack of Pabst Blue Ribbon then got in the other car, the car with the dented front fender, and the two drove off—his entire, poor, shrewd point to rouse an argument out of the rest of the bunch. A hit and run would have saved the good citizen from having to retell his poor excuse of an excuse.
“Go on, tell the young man what happened,” the police officer goaded the driver of the Escalade while my dad got all my necessary paperwork out of the tank, first by going to the driver side door, then by walking around to the passenger side door to get to the glove box, leaving size ten footprints as evidence until the next thaw. I could tell the three officers were enjoying themselves. Their moustaches kept covering their mouths when they would pinch down on their lips to keep from laughing. One officer walked away with my information and sat in the coziness of his heated cruiser. I stood there freezing my ass and ankles off waiting for the—you would expect the driver of the escalade to be a kid, but he was older than me, married, and had two kids of his own—guy to speak up. His friend, another adult, began to speak, but one of the officer’s gave him one of those, “Uh,uh,uh,” phrases and held him back by moving the arm that held the flashlight in his direction.  “From the start. The way you told it to us,” the headcheese demanded. I could tell that if this guy didn’t repeat what had happened the way the officer heard it and thought it so funny, that the officer would cut in as a late-night host might, to get the wanted response. He began with some hesitancy in his voice.
“We turned the corner up by the stop sign and we were checking out the house across the street.”

“Casing the joint,” the second in charge said, adding the proper lingo to the retelling.

“As I said, we were…casing the joint, so I drove faster than I usually would on this street.” Head cheese cut in. I wondered if he would let the guy tell the damn story. “Why were you casing the joint? You can’t just say you were casing a joint without telling us why this house in particular.”

“So,” he paused again then I could see the strain on his face give way, cheeks relaxed, jawbone retracted, mouth opened a little. “A couple groups of friends decided to play a game called ‘Steal Frosty the Snowman.’ The rules of the game are that you have to place Frosty,” he pointed to the lighted up figure on my neighbor’s front porch, “where all the other married couples can see him.” (Is this what marriage does to men? They try to steal a snowman from other people’s yards.) “Everyone tries to steal the snowman without getting caught. If they catch you, you are out of the game, but whoever has Frosty the Snowman on Christmas-Eve night wins the game. All the other couples have to buy the winning couple a dinner.”

“And this guy,” the second in charge pointed to the accomplice. “He ain’t your wife. Was he along for the joyride?”

“He’s just a friend. He’s not in the game. I brought him along so he could look at the house while I drove by without stopping. That way they wouldn’t think something was up.”

“Fine set of eyes he turned out to be,” head cheese laughed.

“So how did you hit my Explorer?” I asked. The two officers chuckled behind the scene.

“Well, I was going kind of fast like I was saying, and it is pretty dark out here with no streetlights, and both of us spotted Frosty, and I guess I took my eyes off the road because the next thing I know, I plowed into the back of your car and knocked it pretty good.”
The officers couldn’t contain themselves any longer. By now all three stood behind the guy and laughed loud. The one officer handed me my insurance card back and gave me a card with the guy’s insurance information, and we exchanged numbers and figured the whole scene had ended for the night. I went back to bed. The red light glowed 2:05 AM.

Frosty the Snowman owes me so much more than just tuition.
Posted by boo2d2 at 11:07 AM